Changes to EU Medical Device Legislation: What you need to know

On April 5, 2017, the European Parliament approved the New Regulations for Medical Devices (MD) and in-vitro diagnostic Medical Devices (IVD), proposed by the European Commission back in 2012. The final adopted text, Regulation (EU) 2017-745, was published in the Official Journal in May 2017. (http://eur-lex.europa.eu/ legal-content/EN/TXT/?uri=CELEX:32017R0745)

While Directives require national implementation in every European country, the Regulations are directly enforced, overcoming issues caused by divergences in the national interpretation of the existing Directives.

The new Regulations aim to enhance patient safety through the introduction of numerous changes and improvements, involving both manufacturers and competent Authorities.

The definition of medical device is extended to groups of products without a medical purpose but similar to medical devices for their risk and characteristics (e.g. coloured contact lenses, facial dermal fillers).

The demonstration of medical device performance with stronger clinical evidence is another significant topic, as well as transparency of information for consumers through the new European database of MD (EUDAMED).

Safety improvements involve also the post-market surveillance, which obliges manufacturers to monitor products placed on the market, providing annual reports on their safety and performance. The Notified Bodies will have a strong authority in this subject by unannounced audits and samples controls. 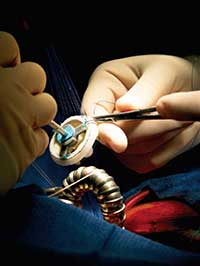