The Forefathers of Pesticide Testing

Pesticides were launched in the 1930s, and the protection they afforded crops was lauded. However, the hundreds of pesticides sold worldwide, with more developed each year, plus cases of the use of banned pesticides like DDT and other persistent organochlorine compounds, mean ongoing pressure to ensure that foodstuffs are safe for consumption.

It was only in the 1960s that concerns for the impact of pesticides on human health began to be raised, but the first methods devised for pesticide analysis were slow, expensive and imprecise. This all changed when Dr Wolfgang Specht recognised that all of the pesticides in use were relatively similar, and that analysis of several of them at the same time would be significantly more efficient as well as more effective. In 1964, he launched the ground-breaking S19 pesticide analysis test as the first ever multi-method in this area.

Used to analyse the contamination in foodstuffs caused by insecticides and other toxic substances, the multi-residue S19 method later evolved to become the official European enforcement method, and the laboratory that developed it – part of the Eurofins family since 2000 – is the recognised Competence Centre in the field of pesticide analysis.

Demand for multi-residue methods in plant protection analysis is huge, but more than half of existing pesticides can be assessed with just one method. Moreover, multi-residue methodology means not only detection, but also direct simultaneous quantification, of residues in order to prove that maximum residue levels are not exceeded. This makes significant contributions to consumer safety.

In 1979 the first method using S19 was published – for tobacco. This test’s real innovation was the first-ever use of gel permeation chromatography (GPC), allowing the separation of the pesticide analytes from the matrix, in particular fat, by size exclusion via a soft gel. At first, around 200 molecules, mainly organochlorine and organophosphorus pesticides which were primarily used during that time, could be analysed; Eurofins is now able to analyse more than 900 pesticides and their metabolites, processing over half a million samples each year.

Thanks to Eurofins’ pioneering spirit, a portfolio of validated methods for the analysis of residues in fruit and vegetables, baby food, tea, and tobacco is now available.

The GPC technique is the most notable step within the Specht-Method and this was further evolved and utilised for the clean-up of polycyclic aromatic hydrocarbons, ubiquitous environmental pollutants generated mainly through the incomplete combustion of organic materials.

Their testing requires the removal of fat without removing fat soluble pesticides. To do this with a solvent is not possible, however GPC works instead on assessment of the similar molecular size of pesticides.

Further developments have seen a new extraction and partition step introduced into the well-established multi-residue DFG method S19, replacing dichloromethane with ethyl acetate/cyclohexane. In addition, working processes were further refined. The latest development is the reduction in use of solvents in order to protect the environment and save costs. 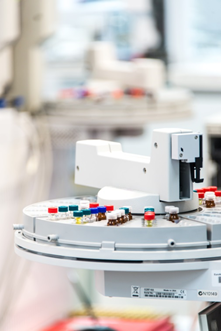