DNA profiling sensitivity has significantly increased over recent years, and forensic scientists are now able to detect DNA in situations where it was previously not possible. However, this super-sensitivity can mean the detection of low-level, background DNA, and mixed profiles in results. In response, Eurofins developed its own globally-leading software for determining the contributors to DNA mixtures in serious crime cases.

Autosomal DNA profiling was first used in criminal investigations in the 1980s. Techniques provided highly discriminating DNA profiles and compelling evidence of association, but did require several days, sometimes weeks, to produce a profile. Techniques have continued to evolve and have increased in sophistication. Now that DNA profiling is so sensitive, courts sometimes call upon forensic scientists to give an opinion not only on the origin of blood, saliva or semen under examination, but also on how it got there – for example, by hand, from a weapon, or via a kick or a punch. Often, the levels of transferred DNA are as small as any background DNA, bringing extra challenges to the interpretation of any mixed profiles found.

As DNA profiling becomes ever more sensitive, the likelihood of detecting DNA from multiple sources is increasing. Interpretation of some of these profiles is straightforward, while others can be very complex. Eurofins responded with the development of LiRa, its own sophisticated statistical software, to help courts and investigating teams to understand the strength of the evidence in cases involving complicated profiles.

The first version has been in use for just over two years by a core group of Eurofins scientists. Accepted in the UK courts, this version is capable of evaluating mixtures consisting of up to three DNA contributors. The next version of LiRa extends its capability to calculate likelihood ratios for profiles with up to four contributors and has been available since February 2018.

Depending on conditions and the quality of conservation of the material, DNA can be present years later. Eurofins’ sophisticated software has already been used to solve a number of cold cases, including a 1984 violent sexual assault in Bradford, England, for which the assailant recently received a conviction, 33 years after the attack. Forensic scientists found a tiny speck of blood on a knife recovered from the scene and obtained a low-level, partial DNA profile. While the low-level nature of the result meant that the forensic scientist was unable to give a weight of evidence using conventional means, i.e. the binary model, she was able to see that the prominent components matched that of the suspect. Using LiRa (discrete model), it has now been possible to calculate a likelihood ratio - the evidence is 490 million times more likely if the DNA came from the suspect and an unknown, than from two unknowns.

The software’s capability is strengthened by Eurofins’ own statistician and IT development team who, if necessary, can attend court to explain complex statistics and defend challenges. In addition to cold cases, LiRa is used in the investigation of current crimes.

Traditional methods take a binary approach to analysis and Eurofins continues to employ such a method with single-source profiles and two-person DNA mixtures. The early version of LiRa used the more advanced discrete approach, taking into account the presence or absence of DNA alleles, but not their heights. The latest version of the software, LiRa V2, uses a continuous model and takes a quantitative approach, measuring the peak heights and treating them as continuous variables to calculate a likelihood ratio following comparison with a nominated individual. 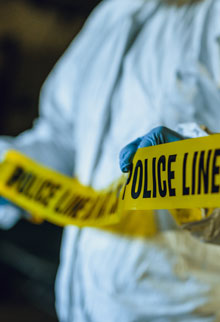