Safeguarding the Health of the World’s Most Vulnerable Consumers – Infants

In 2008, China was rocked by a national food safety scandal when it emerged that a chemical component called melamine, which is harmful to humans and is used in plastic and fertiliser production, had made its way into infant formula and milk. Of an estimated 300,000 victims affected by the compromised milk and infant formula, six babies died and an estimated 54,000 babies were hospitalised. The tragedy highlighted the importance of using the most stringent methods to test infant formula. Having screened tens of thousands of samples for melamine levels during the Chinese scandal, Eurofins has also played a crucial role in a global initiative to overhaul, redevelop and modernise infant formula testing.

Infant formula is often the sole source of nutrition for infants and must contain 100% of their required nutrients. By its very nature, it is one of the most highly regulated products in the world, and it is essential that the most stringent validated testing methods are used for product analysis. The 2008 Chinese milk scandal was described by the World Health Organization as one of the largest food safety events it had ever had to deal with, and noted that the crisis of confidence among Chinese consumers would be hard to overcome. At that time, the standard test methods for infant formula were those developed by AOAC International (formerly the Association of Analytical Communities) in the 1980’s, which had become outdated. The scandal was the catalyst for an initiative to modernise and improve all infant formula testing methods.

As members of AOAC, leading infant formula producers such as Abbott, Danone, Johnson & Johnson and Nestlé, came together in 2010 to form the Stakeholder Panel on Infant Formula and Adult Nutritionals, SPIFAN, to develop a new uniform suite of stringent infant formula testing methods. Scientists from Eurofins Food Integrity and Innovation, at that time Covance Food Solutions, were chosen to lead SPIFAN, as Chair of the stakeholder panel, and were chosen to validate all new testing methods. Eurofins scientists also held positions as Working Group and Expert Panel Review Chairs, as well as method developers and reviewers.

SPIFAN identified and validated a modern suite of best practice analytical test methods, the current AOAC Official methods for nutrition in infant formula and adult nutritionals. 50 new AOAC Official Methods have been validated by SPIFAN which are regarded as the world and industry standard in infant formula testing. New methods developed to test for fat soluble vitamins, A, D and E for example, are considered to be among the most accurate and precise methods ever developed.

Eurofins scientists participated in the collaborative study trials for over 15 of these new SPIFAN methods. The new approved SPIFAN methods for the analysis of Vitamin D, Iodine, Choline, and Carnitine were all developed and validated by Eurofins scientists, and are considered the international ‘gold standard’ in testing of this kind.

The redeveloped tests which are based on different methods than those used in the 1980s, are nowadays applied by every infant formula producer across the globe. They are recognised by international standards groups such as the International Standards Organization (ISO), the International Dairy Federation (IDF), and Codex Alimentarius. SPIFAN, and the test methods developed by Eurofins, changed the landscape of infant formula testing, and showcased Eurofins’ ability to create world-class testing standards.

The Vitamin D, Iodine, Choline, and Carnitine methods developed by Eurofins made use of some of the most advanced analytical instruments at the time.

The assays for Vitamin D, Choline and Carnitine involved the use of LC MS-MS (Liquid Chromatography Tandem Mass Spectrometry) in vitamin analyses for the first time. This is an analytical chemistry technique that combines the physical separation capabilities of liquid chromatography with the mass analysis capabilities of mass spectrometry, far more accurate, precise and specific than the HPLC, colorimetric and ELISA methods used pre-SPIFAN.

The Iodine assay redeveloped by Eurofins utilised ICP-MS, where equivalent tests previously used ion specific electrode testing. ICP-MS, or inductively coupled plasma mass spectrometry, is capable of detecting metals and several non-metals at very low concentrations. This is achieved by ionising a sample with inductively coupled plasma and then using a mass spectrometer to separate and quantify ions. 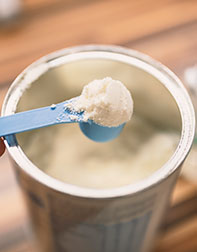