Not Wanted! Dead or Alive! Mould and Bacteria

Mould and bacteria growth indoors can lead to illnesses. Work by Eurofins to improve testing methods to determine the presence of fungal and bacterial spores in indoor environments has resulted in much faster, more specific and detailed analytical tests. These tests increase the ability to detect a wider range of mould and bacteria species, including dead or dormant, that can develop inside buildings.

Awareness is growing of the threat to human health from mould and bacteria indoors, including dead or dormant proliferations. Modern buildings with higher energy efficiency may have limited air circulation and, consequently, higher humidity levels. Unfortunately, such conditions can lead to mould formation and bacterial growth. Higher numbers of these microorganisms both in air and in construction materials may affect the mucous membranes, causing respiratory ailments such as asthma, and symptoms resulting from an activation of the immune system, such as itching, eye discomfort, headaches and fatigue. In 2009, the World Health Organization (WHO) stated, that mould and bacteria in indoor environments should be minimised.

Traditional testing methods, where species determination analysis is based primarily on morphology, pigmentation and growth characteristics on media, were limited to living mould and bacteria cells. In fact, dormant moulds can proliferate again under the right conditions, and may also produce harmful toxins (e.g. streptomyces geosmin). Traditional testing methods are also laborious and time-consuming, with samples collected either by extracting a piece of the construction material or by air sampling, before cultivating moulds over seven days. Moreover, this cultivation test does not take into account any dormant/dead bacteria or mould spores.

Eurofins Environment Sweden developed a superior method to detect total mould/bacteria biomass, so including living and dead mould. A new DNA test, developed together with Eurofins’ Genomics team in Ebersberg, Germany, uses a DNA probe designed to attach to most mould found in the environment. The company also offers another similar probe for bacteria and, in addition, specific probes for some species of mould and bacteria whose odours make them undesirable. One test option produces total mould/bacteria numbers, while another identifies bacteria and mould species by strain.

Although attribution of specific microorganisms that may occur in damaged building materials to specific illnesses remains scientifically and medically difficult, these new tests mean customers are better placed to make informed decisions about their buildings’ condition and their employees’ health.

The tests can help distinguish between new ongoing moisture damage and old damage from previous mould or bacteria growths and, if total mould and/or bacteria numbers are above acceptable levels, damaged material can be removed from the building’s structure and substituted with new. The tests on living and dead mould can also help evaluate different sorts of building materials for their qualities in terms of mould susceptibility.

Regulatory developments in a number of countries are likely to result in the testing method becoming more widely applied.

An ability to identify total numbers of mould and bacteria present, whether living or dead, gives scientists a much deeper understanding of the extent of bacterial presence. Applying a simple criterion that a “damaged” material contains levels of mould or bacteria more than ten-fold higher than a reference material, Eurofins researchers detected a substantial number of "damaged" samples with 10-1000 fold higher levels than the reference sample. Bacteria were responsible for a far higher number of the “damaged” findings, and were sometimes solely responsible. The experiments also showed that living microorganism numbers were considerably lower than the total numbers, demonstrating the importance of detecting dead and dormant mould and bacteria as well as living, in order to define moisture damages causing indoor air complaints. 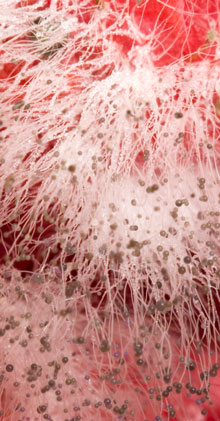