Have you ever wondered what astronauts eat when they are in space? With a relationship with NASA spanning over five decades, Eurofins (as WARF Institute, Hazleton Laboratories, and Covance) has played a crucial role in ensuring the food that fuels astronauts as they travel to outer space is nutritious, safe and palatable.

During the 1960s, The National Aeronautics and Space Administration (NASA) was heavily involved in a programme to send manned rockets into outer space, to land on the moon for the very first time. Preparation required hundreds of extremely challenging research and innovation projects, including developing the products that the astronauts would eat during the first journey to the moon.

Food scientists needed to develop fully fortified foods, which could remain stable for long periods of time in outer space. These foods would require lyophilisation, or freeze drying, for stability and storage, and needed to contain substantial nutrients, to sustain the astronauts, while also tasting good.

NASA partnered with Eurofins scientists, at the time WARF Institute, Hazleton Laboratories, and Covance, to determine the correct steps required to fortify these foods. The vitamins that were to be used needed to be stabilised using an encapsulation process, where vitamin molecules are confined within larger molecules. Testing for these encapsulated vitamins posed a particular challenge. However, new methods were required to accurately determine how nutritious the stabilised food products were across the board, in terms of proteins, vitamins, carbohydrates, fats and minerals.

As part of the project, Eurofins scientists developed a range of new test methods, utilising High Performance Liquid Chromatography (HPLC) and Inductively Couple Argon Plasma Atomic Emission Spectroscopy (ICAP), and many of the methods are still in use today. Methods developed for NASA to test for vitamins and minerals in these foods have since become Official Methods of AOAC International (formerly the Association of Analytical Communities), and are used in food testing laboratories across the world.

After the extraction techniques and analyses were developed, Eurofins laboratories also put them into practice and tested all of the foods developed by NASA for their nutritional content and stability. Many of these test methods became official methods and are used today for food testing beyond the purposes of space travel.

Eurofins’ close working relationship with NASA continues today as they consistently develop new, more stable, and better tasting foods for their astronauts. As NASA develops food to be used in the International Space Station, and food to be used in the first manned space mission to MARS, which must remain stable for even longer, up to a five year period, Eurofins performs all quality control testing on these foods used in space.

The food products developed by NASA had to be specifically fortified with nutrients and stabilised to ensure a longer shelf life. In order to ensure that the foods still contained the correct levels of vitamins and minerals needed, Eurofins was tasked with the development of new bespoke techniques which would allow for the extraction of these vitamins and minerals to facilitate testing.

Methods used historically only had to measure natural levels of a vitamin. The NASA samples had additional vitamins added to the food, so the samples had to be treated with newly developed extraction techniques to isolate the natural vitamins and the added vitamins, a very delicate procedure.

Those methods which tested for minerals made use of Inductively Couple Argon Plasma Atomic Emission Spectroscopy (ICAPAES), a technique which is based on inductively coupled plasma to produce excited atoms and ions that emit electromagnetic radiation at wavelengths indicating a correlation to a particular element. 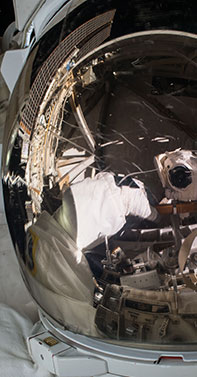