Finding Adulteration Even When Not Looking For It

Leading the way with non-targeted screening

When you search for something specific, that’s probably all you are likely to find. By removing the constraints of targeted analysis and searching without restriction, Eurofins has opened up a whole world of new possibilities.

Eurofins’ evolution of non-targeted screening methods is one of the Company’s most exciting developments. Teams from across the Company have pioneered wider screening techniques covering a range of sectors, from food and pharmaceutical, to environment and water. A very prominent example of an unexpected, and hence missed issue that evolved into a scandal was the addition of the industrial chemical melamine found in baby milk in China in 2008. Another was the addition of horse meat to beef in Europe in 2013. Such fraudulent practices were never expected and so were not explicitly searched for. Non-targeted screening tests are enabling a whole variety of industries to better guard against health crises.

High-resolution nuclear magnetic resonance (NMR) testing is one example for such an untargeted screening approach. Eurofins’ method is now able to provide additional insights to those offered through conventional approaches. This investigative technique allows the detection of hidden anomalies, such as the addition of sugar to honey, or the mislabelling of geographical or botanical origins in the composition of a complex matrix. The approach can be applied to liquids or extracts from solid foods, requiring only limited perparation of the sample.

Another of Eurofins’ pioneering techniques is a new non-targeted screening method, based on 16S rDNA screening and next generation sequencing. Used to profile the microbiome of food, pharmaceutical and environmental samples, the test focuses on identifying the microorganism communities present, helping to recognise a broad spectrum of bacteria. For example, the test can be used for the control of fermentation processes or the analysis of biofilms (a thin microbial layer). The tests require no assumption to be made about a given species of interest, and all species included in the database can be identified in one test.

These sophisticated testing methods also have numerous applications in the environmental world. Eurofins Vejen is working with the University of Copenhagen, Denmark, to develop an untargeted method, ChemFingSoil®, for assessing environmental hydrocarbon pollution. The first commercial project using this technique, examining the origin of hydrocarbon pollution in soil, was launched in February 2017. In the near future, the project is planned to be extended to involve chemical fingerprints of hydrocarbons in indoor air and also of soil and sediment pollutions with polycyclic aromatic hydrocarbons.

And this is only the beginning. Eurofins’ laboratories globally are developing a whole range of other non-targeted screening techniques. Eurofins’ insights are helping to ensure that consumers and the wider world at large are fully-informed about exactly what is in the products we all consume.

Eurofins’ techniques are based on multivariate data analysis, multiple analytical approaches and extensive use of computer models.

NMR is carried out on the protons or carbon atoms of the molecules to be analysed, a full resonance spectrum becoming available within minutes. This technique allows the non-targeted detection of all organic compounds, and the NMR profile can be regarded as a unique fingerprint of the sample. Databases of authentic samples allow the establishment of statistical models for checking the integrity of foodstuffs.

Eurofins’ launch of its next generation sequencing test service has opened up non-targeted bacterial screening for food and feed testing. Used for raw or processed food matrices, it provides a view of flora in the product thanks to bioinformatics and database tools. 16S rDNA is the commonly used and recommended DNA target region for bacterial species identification.

ChemFingSOIL™ was designed to describe the hydrocarbon source archetypes in soil by use of multivariate statistical analytical tools. Eurofins has, together with University of Copenhagen, patented the data processing method, with six archetypes validated and so described by the model: natural C5 hydrocarbons, petroleum / turpentine, engine oil / lubrication oil, gasoline / fuel oil, and pyrogenic hydrocarbons. Together they account for a vast majority of the pollution found in soil samples tested. The model is built on the chemical pattern of hydrocarbons in soil and is derived from GC chromatograms, which provides a quantitative analysis of volatile and semivolatile organic compounds. Now an objective and quantified determination of the contents of any soil sample can be given. 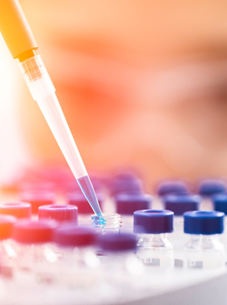