Detecting drugs in hair has been possible since the early 1980s using forensic toxicology, a useful diagnostic tool in proving past drug use or exposure. Two Eurofins forensic toxicology laboratories – Toxlab in Paris and ChemTox in Strasbourg – were involved in the ongoing evolution of testing techniques for several years and together achieved an important breakthrough that assists the judicial system and victims of drug-assisted crimes.

Psychoactive substances are being used to facilitate crimes such as thefts and sexual attacks. Administered surreptitiously and without the knowledge of the victim, such crimes often involve drugs with a very short half-life. The drugs, including hypnotics, sedatives and antihistamines, can rapidly impair consciousness and cause loss of memory of events that occurred after drug intake. This meant laboratories and law enforcement agencies were struggling to assess drugs with a short ‘life’, and victims of crimes such as rape, sexual assault or theft were often left not immediately or fully understanding what had happened to them. Delays of more than two or three days in reporting such crimes only compound the problem, as most of the drug molecules were undetectable through the techniques classically used in forensic toxicology (gas and liquid chromatography).

Presenting a solution, Eurofins used liquid chromatography coupled with tandem mass spectrometry and with triple-quadrupole, for the determination of these molecules in biological fluids and, more particularly, in hair. Essentially, they were able to scientifically and conclusively determine the presence of a drug in hair samples provided as evidence in drug-facilitated crimes, even when there was a delay in the submission of evidence for analysis. It could also show that the drug detected was only ingested once on the date of the crime, eliminating defences that the victim was a regular user of that drug.

Given the variety of analytes, the limited amount of hair samples, and the need for a fast result, the Company limited the number and the complexity of the extractions, and focused on the technique of selected reaction monitoring (see below). Once the technique had been validated, Eurofins helped the French Ministry of Health and the French Ministry of Justice to publish a circular outlining how to obtain biological samples (blood, urine and hair) in such cases. They also participated actively in the organisation of external quality controls and the creation of a committee on drug facilitated crimes, and they continue to provide their data to the French Health Agency to help it build an accurate epidemiological database.

Traditional radio-immunoassay testing evolved into liquid chromatography testing coupled with tandem mass spectrometry to meet the requirements of the Courts of Justice for analysis by two independent methods. Liquid chromatography coupled with mass spectrometry is applied in Forensics mainly for the analysis of thermally-unstable molecules in complex samples such as biological fluids. A triple-quadrupole mass spectrometer is a tandem mass spectrometry method in which the first and third quadrupoles act as mass filters, and the second causes fragmentation of the analyte through interaction with a collision gas. Selected reaction monitoring is a method used in tandem mass spectrometry where an ion of a particular mass is selected in the first stage and an ion product of a fragmentation reaction of the precursor ion is selected in the second stage for detection. Having information on the mass of the molecule (ion) itself and its fragmentation products allows for unambiguous identification of molecules. 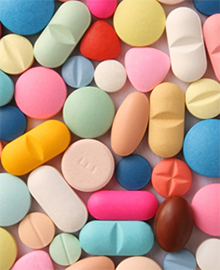