Algae, Algae, Everywhere. Toxic and What a Stink

Warm weather brings people outdoors and often to recreational waters such as beaches, lakes, ponds and rivers to enjoy those beautiful days. It can also bring about potentially toxic algae to these same bodies of water. While a number of people are familiar with “red tides,” bluegreen algae, more correctly known as cyanobacteria, can be just as dangerous.

Toxins produced by certain strains of cyanobacteria found in these freshwater, estuarine and marine bodies, can cause liver and kidney damage, have been linked to Alzheimer’s and may be carcinogenic. Higher levels of the ratio of nitrogen to phosphorus; increased organic matter availability; higher temperatures, and decreased light intensity attenuation are among the factors that influence the formation and persistence of these cyanobacteria.

In addition, scientists have found that climate change may be a catalyst for a global increase in harmful cyanobacterial blooms. All these impacts have led to increased calls for improved testing methods for cyanobacterial toxins. Eurofins Abraxis responded with the development of rapid detection test kits for microcystins, cylindrospermopsin, saxitoxin, and the world’s first detection kits for anatoxin-a and ß-Methylamino-Lalanine (BMAA).

Cyanobacteria are often confused with green algae, because both can produce dense mats that can impede activities such as swimming and fishing, and may cause odour problems and oxygen depletion which can affect fish. However, unlike cyanobacteria, green algae are not generally believed to produce toxins. Cyanobacterial blooms, on the other hand, are known to produce highly potent cyanotoxins that can damage the liver, kidneys and the reproductive system, and even cause death.

These toxins can enter the body through accidental ingestion, inhalation or dermal contact, or can end up in drinking water through the water processing system, as occurred at Lake Erie in Ohio in 2014 and which badly affected the city of Toledo. Some bacteria blooms can overwhelm the filter or capacities of water treatment plants and there is evidence that the toxin can enter the food chain via irrigation systems. Cyanobacteria do not always produce toxins however, and the presence of toxins can only be detected through water sample analysis. The toxin microcystin was detected at Toledo by the use of kits from Abraxis, part of Eurofins Technologies since 2017, and the test has since become EPA method 546.

Eurofins Abraxis is the world leader in rapid test kits for freshwater and marine toxins and continues to develop unique tests for cyanotoxins. Many of them are patent-protected and Eurofins Abraxis is shortly to commercialise the first ELISA – an enzyme-linked immunosorbent assay – for the cyanobacterial anabaenopeptins toxins. Eurofins Abraxis is also developing tests to help water companies to manage cyanobacteria that produce the compounds geosmin and methyl isoborneol which have a very strong taste and, particularly, odour.

Cyanotoxins can be produced by a wide variety of planktonic cyanobacteria. The most commonly identified cyanotoxins are microcystins, cylindrospermopsin, anatoxins, saxitoxins, and BMAA. Microcystin-LR is the most toxic form of over 160 known toxic variants, and is also the most studied by chemists, pharmacologists, biologists, and ecologists. Microcystins contain several uncommon nonproteinogenic amino acids such as dehydroalanine derivatives and the uncommon ß-amino acid ADDA. Microcystins covalently bind to and inhibit protein phosphatases PP1 and PP2A and can cause non-alcoholic liver disease, pansteatitis, and liver cancer. Eurofins Abraxis offers two cyanobacteria toxin test formats: a quantitative ELISA which takes 1.5-3.5 hours to produce up to 40 results, and a semi-quantitative lateral flow immunoassay (dipstick) that takes around 15-30 minutes depending on the analyte. 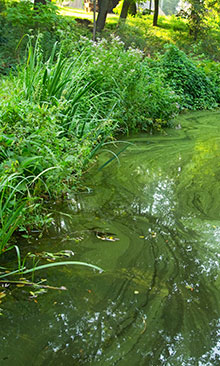