Eurofins Scientific was founded in 1987 with 4 employees to market the SNIF-NMR™ technology, a patented analytical method used to verify the origin and purity of several types of food and beverages and identify sophisticated fraud not detectable by other methods. Today the Eurofins Group is a leading provider of analytical services with:

Eurofins' history can be divided up into four distinct phases: 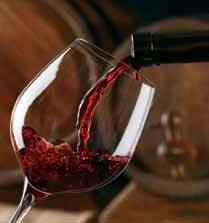 In 1987, the Group was founded when Gilles Martin purchased the rights to ground breaking testing technology SNIF-NMR® from the University of Nantes. It uses Nuclear Magnetic Resonance to detect whether sugar has been added during the wine-making process to increase the alcohol content. Certain additions were not detectable by other methods.

In the following years, the SNIF-NMR® patent was registered and approved in the US and broadened to be applied to a wider range of products than the original wine test, such as fruit juices, natural flavours and other non-alcoholic beverages, picking up sophisticated frauds that traditional testing methods failed to detect. The strategy was then formulated to develop the offering in-house and to expand the range of tests provided to customers. Indeed, even 30 years later, the SNIF-NMR® technology has not been equalled for detecting certain types of adulteration and still generates about €1 million annual revenues. Ever since, Eurofins has often been the first in the world to develop many new testing technologies that have a positive impact on day-to-day life. 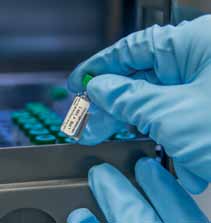 In 1997, Eurofins’ IPO in Paris helped fund the company’s rapid geographic expansion followed by a secondary listing in Frankfurt in 2000. The strategy was to join forces with the best laboratories, with the brightest talent and the most exciting technologies, in order to build a leading position in core markets - Food, Pharma and Environment testing.

By 2001, Eurofins was present in eight countries and had a network of more than 50 laboratories.

Market leading positions were built in core markets as well as key segments such as genomic information and contaminants testing. This in turn enabled the Group strengthen its service offering to top-tier clients in the pharma and retailing sectors. 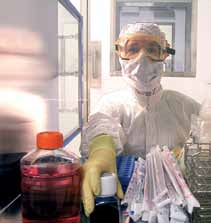 This was a period of foundation building for the Group, developing the infrastructure to support growth and enhance service to customers, as well as operating much more efficiently. Bigger and more productive sites were developed, allowing Eurofins to drive higher sales and margins through economies of scale and additional cost saving measures (rent, personnel, consumables) while a unified IT platform was developed that provided a cutting-edge logistical advantage for this now global business.

Despite its rapid growth, Eurofins retained a start-up’s passion for innovation and ground-breaking science by structuring its laboratories as independent companies, led by entrepreneurs including many centres of excellence, nurturing talent and funding research. 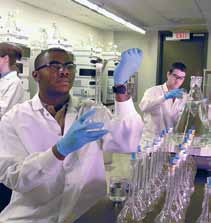 Eurofins is continuously expanding its global network, both through acquisition and by seeding its own greenfield laboratories to meet customer demand. Between 2014 and 2018, the Group has launched 100 start-up laboratories in just five years. With the goal of becoming the world leader in bioanalytical testing, Eurofins now operates over 800 laboratories across 47 countries in six continents, with a product portfolio of more than 200,000 methods and about 45,000 employees.

Eurofins is currently undergoing another phase of growth based on the unique infrastructure and technological portfolio developed and implemented in the previous years.

The Group continues to expand its global coverage and local market share both through organic growth and acquisitions of leading laboratories.