Change of certified entity for GLP certification in Brazil

Change of certified entity for GLP certification in Brazil

When EAS first attained its GLP certification from the regulatory authority INMETRO in 2010, the company registered in the certificate was Eurofins Food Brazil ("Eurofins do Brasil Análises de Alimentos Ltda").  At that time both Eurofins Agroscience Services and Eurofins Food worked under the same company legal ID in Brazil.

Eurofins Agroscience Services Ltda later acquired its own company legal ID and on January 3rd 2015 EAS Brazil started the process to change this in the GLP certification.

Everyone in the company was committed to achieve this goal and aimed to gain recognition from clients and authorities through high quality work. The goal was realised in March, when there was an audit by INMETRO - the statement was zero non conformities for EAS Brazil.

A few months later, in July, the official document arrived stating the change of legal ID, pending only the update in the site and issuing the new certificate.  On September 3rd this whole process was completed and now we are proud to announce that EAS in Brazil has its own GLP certification.

Eurofins Agroscience Services Brazil are in the process of buying an LC MSMS API5500. This new machine will increase our lab capacities and portfolio. 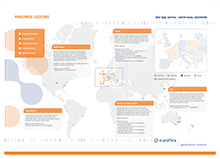